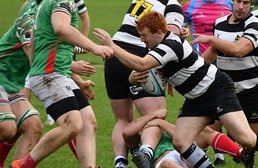 Third win on the bounce at Ironsides

Farnham travelled to Battersea with yet another changed team from the previous weeks. Conditions were perfect for open free flowing rugby with sunshine and a light breeze blowing across the pitch.
Battersea Ironsides kick offed and soon forced a turnover in Farnham’s half. After a number of rucks the ball was spun down the backline for the winger to score in the corner after barely three minutes on the clock. The conversion was missed. 5-0
A period of exciting end to end rugby followed with both teams having chances yet frequent mistakes allowing either defending side to clear. In the sixteenth minute, a clearance by Ironsides was gathered on the righthand side of the Farnham ten metre line. Number 11 Sam Elliott ran the ball well into the opposition half. Linking with his forwards and after a couple of pick and goes the scrum half, number 9 Harry West, found Elliott back on his wing. He made ground and fed the ball back inside to Toby Comley who scored. The conversion put Farnham two points ahead. 7-5
The game continued at pace with plenty of attacking play on both sides. Battersea retook the lead when a speculative kick was knocked forward five metres out by the Farnham fullback and a penalty conceded in the ensuing melee. Battersea Ironside’s scrumhalf took a quick tap, and two rucks followed and from one yard out the big Battersea number 5 drove over to score. Converted 12-7 to Battersea.
Farnham hit back quickly after a penalty kick took them to the corner five metre line. With the ball safely gathered by Ben Adams and maul set, the pack drove over the line with Sam Woodhams claiming the try from beneath the pile. Conversion missed, the score 12 apiece.
Late into the first half Farnham had another great attacking opportunity deep in the Battersea 22, but a knock on by Farnham forwards enabled Battersea to regather and a clean break by their large number 10 took the ball back into the Farnham half. The last minutes saw some exceptional defending from the Farnham team close to the try line, which eventually led to another turnover to Farnham. A penalty from a high tackle on centre Tim Salmon enabled the ball to be cleared and the half time whistle was blown.
The second half Farnham played down the slope with the breeze slightly favouring them. The game took up the themes of the previous half with some good attacking rugby and great defence on both sides leading to mistakes and turnovers.
On the tenth minute Battersea gained the ball from a turnover on the Farnham ten meter line. The ball was quickly transferred to their number 10 who fed the ball to the Battersea flanker who scored. 19-12.
Ten minutes later, Farnham had a line out after a penalty on the Battersea 22. This time the ball was off the top to the backs and some lovely hands from Tim Salmon saw the ball back to fly half Matt Farns who took the ball fifteen yards to score on the left hand side. The conversion levelled the game again.
The Farnham pack began to dominate in the tight and won a series of penalties against the Battersea Ironside forwards. On thirty minutes, Farnham played the quick tap from one such penalty and took the ball up to pressure the Battersea try line. Unfortunately, play was stopped due to an injury to one of the Battersea players, but the referee had been playing penalty advantage into the Farnham side who kicked touch onto the five-metre line. This time, the ball was taken by Comley, the maul was set, and rolled over the try line, with a second try claimed by Sam Woodhams, who was thoroughly enjoying the bright sun. A conversion by Matt Farns put Farnham in the lead for the second time in the match. 26-19
With the final minutes being played at an exciting pace as both sides fought hard, Farnham conceded a penalty in their own half on the ten metre line. Fortunately, the kick sailed wide and from the ensuing drop out Battersea knocked on. Farnham’s impressive pack won the ball which was taken through a number of phases well into the Battersea half. Eventually the hosts conceded a penalty within comfortable kicking range which was dually converted. 29-19.
From the kick-off, Tim Salmon’s clearance kick missed touch and was taken by the Battersea wing, but Alex Chalker followed up well and took the winger into touch with a great tackle. The referee blew for full time and Farnham had gained revenge for the earlier defeat in the season.
Podium points: Tim Salmon 3, Sam Woodhams 2 (one point per try), John Vincent 1.
Share via
FacebookTwitter
https://www.farnhamrugby.org/t
Recent news