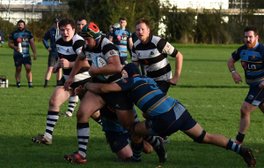 Honours even in the Battle of the Hogs Back

The scene was set for the first ever local derby between Farnham and Guildford. On a gin clear day, Farnham welcomed to Monkton Lane over a hundred pre-match diners including Nigel Gillingham, president elect of the RFU and John Pownall, Chairman of Surrey RFU. A large crowd was swelled still further by those who had enjoyed the curtain raiser in which Farnham’s U15s overcame their Guildford counterparts 40-3 in a thrilling display of running rugby.
There was all to play for with one league position between two clubs which have been separated over the years by a chasm but now Farnham are on the way up while Guildford have somewhat stuttered.
Farnham kicked off into a stiff swirling breeze sweeping in from the Town End. The game started at pace. Both sides had explosive quick back-rows. Pressure and tackling were at a premium. Farnham’s Jonny Vincent, who honed his rugby in the unforgiving South West leagues, and new talisman Oscar Henderson backed by the ever present Toby Comley had their own mini battle against a lively Guildford trio. Some early scuffles were not tolerated by the referee who, bar being unsighted to award Farnham what could have been the match winning try, had a flawless afternoon.
Marco Azevado, enjoying his 50th appearance in the Black and White, threatened on the charge and the early territory went Farnham’s way. As in all sports, the weather plays it’s part and thundering clearances by Guildford kept pushing the home team into reverse. Farnham overthrew at their line out in the Guildford 22 to release Guildford flanker Devereux. Slick hands saw the Farnham flank exposed allowing former Farnham winger Joe Wigmore to race over for the first score. Easy extras for King. 0-7.
Farnham were put under pressure by the Guildford defence. Quick line speed forced quicker and quicker reactions in the Farnham back line. Their attacks faltered because of that pressure and led at times to poor, unsympathetic passes. Why fizz a bullet pass to a recipient but a few feet away?
At last Farnham worked through that pressure. From a scrum fifteen metres out, skipper Ollíe Brown released the backs through fly half Matt Farnes and a rehearsed move saw Toby Salmon on the loop and under the posts untouched. Easy pickings off the tee for the try scorer. 7-7.
A combination of the wind and two strong defences that cancelled each other out resulted in a frenetic, somewhat scrappy, first half. Both sides had made inroads but came away empty handed. The Guildford penalty count was on the rise with countless offsides at the gain line. With the clock running down Farnham launched an attack and were held just short of the line – illegally deemed the ref - and three penalty points for Toby Salmon. 10-7 at half time.
In the last two games Farnham had used their three replacements by half time. It was no different in this match. Matt Farnes had already been replaced by Dec Kavanagh in the backs and Ben Edwards by Guy Williams at prop when Oscar Peterson was forced off to be replaced by Nathan Phillimore. Once more winger Reece Stennett was drafted into the back row. The disruptions seemed to affect the normally sprightly Farnham back division and so it was down to the pack to put the pressure on.
Ben Adams and Jordan Frost in the second row and the ageless hooker Jules Joris earned their beers in both defence and attack. However, it was Guildford who delivered two hammer blows in the first few minutes of the half. Despite being on the back foot, breakout tries by flanker Madge and winger Vincent pushed the score to 10-17 with the bulk of the half still to go.
Gradually the tide turned and aided by the strengthening breeze, Farnham entrenched Guildford in their own 22. Guildford were caught off-side yet again and Toby Salmon reaped the 3 penalty points. Time and time again Farnham threatened but on each occasion they were kept at bay by desperate defence. Gabe Hills looked almost certain to score when caught with a try saving tackle. A series of Farnham pick and drive attempts inches from the line were all snuffed out. Finally, an attack down the left wing saw centre Phillimore tackled around the neck with the line begging. Flanker Devereux was sent to the bin.
Back battled Guildford and with five minutes to go Farnham conceded a needless penalty under their posts. An easy three for King and, perhaps, the winning score. 13-20.
Farnham had to respond and did. Azevado, on the charge, was held. Adams, on the charge, was well tackled. Guildford kill the ball and the penalty to Farnham is quickly taken by scrum half Brown with Guildford in disarray. Quick ruck ball and Dec Cavanagh went in under the posts for the last action of a scrappy but pulsating afternoon. Toby Salmon’s conversion sealed the 20-20 draw.
The general consensus was that Farnham butchered at least three tries. Perhaps – but huge credit to the Guildford defence who battled tirelessly, particularly in the second half.
Next week the Black and Whites travel to Chichester in hope of more league points to launch a steady climb to a mid-table slot that the team’s performances, if not the results, deserve.
President's Podium:
Marco Azevedo - 3 points on his 50th first team appearance - tremendous performance
Toby Salmon - 2 started at inside centre more space and time. Back in to 10 still tops.
Ben Adams - 1 getting better with every game - even Dad said so.
Share via
FacebookTwitter
https://www.farnhamrugby.org/t
Recent news